Can creatine increase your testosterone levels?

There is no convincing evidence that creatine can increase your testosterone levels.

Creatine is known for reliably improving physical performance.[1] Less commonly, it has also been marketed as a testosterone booster. Having a supplement that increases both exercise performance and testosterone levels would be the Holy Grail of (legal) supplements, but is the testosterone-boosting claim supported by the evidence?

Where does this idea come from?

Where indeed? Supplements often get tested for their effects on hormones, especially if they have anabolic properties, as does creatine: by helping regenerate adenosine triphosphate (ATP), the main energy carrier in your cells, creatine helps you exercise harder and lift heavier weights, and that extra work results in more muscle.

This anabolic effect, being mediated by an increase in workout intensity, is indirect. But couldn’t creatine also have a direct anabolic effect? Couldn’t it also, maybe, increase testosterone? That’s the kind of question that drives scientists to seek answers through studies.

Now for the actual research. Three randomized controlled trials (RCTs) get cited to support the notion that creatine may raise testosterone levels.

The first randomized 20 healthy young rugbymen into two groups.[4] The creatine group took a loading dose (25 g/day) for one week, then a maintenance dose (5 g/day) for two weeks. The participants’ testosterone levels actually did not change, neither in the placebo group nor in the creatine group. By the end of the study, however, the creatine group saw a significant 0.12 ng/mL (12 ng/dL) increase in dihydrotestosterone (DHT) — a highly active androgen converted from testosterone and known to play a role in hair loss To date, this has been the only RCT to test creatine’s effects on DHT.

The second and third RCTs both randomized 20 active, healthy young males into two groups. After taking 20 g/day for 1 week, the creatine group in each study saw a significant increase in testosterone, whereas the placebo group saw no change. The first study saw a 0.57 ng/mL (57 ng/dL) increase,[5] and the second a 1.5 ng/mL (150 ng/dL) increase.[6]

In all three studies, the hormonal increases were statistically significant but small, leaving the participants well within normal ranges.

Three studies in active, healthy young males have seen small hormonal increases — one in DHT, the other two in testosterone. These studies are the three commonly cited to support the position that creatine can increase testosterone.

What do other studies say?

Ten other RCTs with a total of 218 participants have looked for a creatine-testosterone connection. They lasted from 6 days to 10 weeks and used daily creatine doses ranging from 3 to 25 g (except for one study that used a total of 4 pre-workout doses over 10 weeks[7]). They all reported that creatine had no effect on testosterone levels.[8][7][9][4][10][11][12][13][14][15] Nine of the ten RCTs used creatine monohydrate; the remaining one gave creatine malate (0.07 g per kilogram of body weight per day) to 19 young male runners for 6 weeks.[16]

All but two of the RCTs discussed in this article were in active, healthy young males (one was in untrained young males,[11] another in trained older males[8]). There are no studies in men with abnormally low testosterone levels. There are no studies in females, either, but given the largely negative results from the male studies, we can hypothesize that creatine supplementation does not affect female testosterone levels.

Finally, in addition to the number of studies, one should also consider their respective lengths. Here, the studies that saw an increase in testosterone or DHT lasted between 1 and 3 weeks, whereas those that saw no increase lasted up to 12 weeks. Longer studies aren’t always more reliable than short ones, but they do tend to have greater pragmatic significance. To conjure an example, a given increase in testosterone might have a significant effect on your muscle mass over months but not over days. 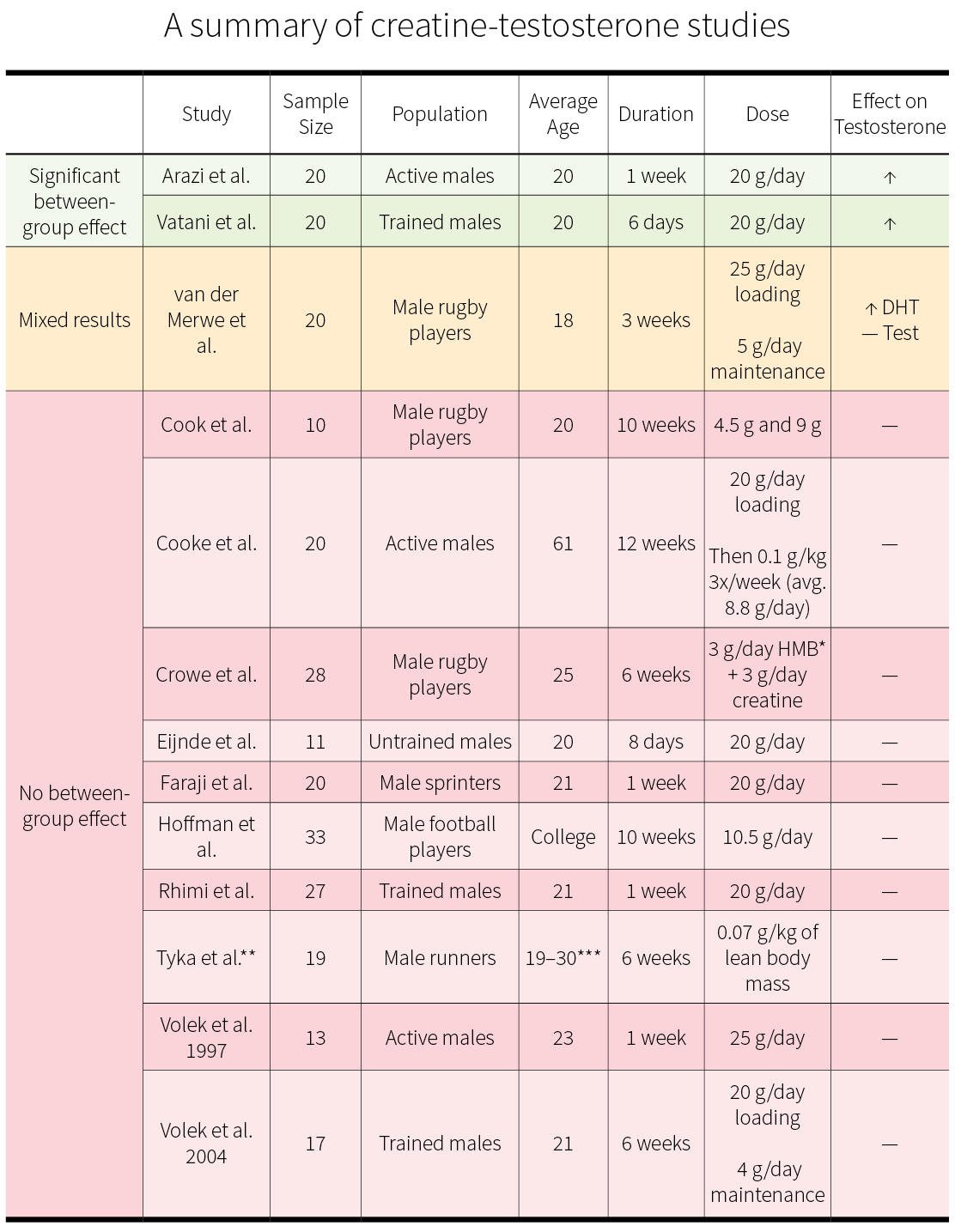 * While there was no creatine-only group, studies have not shown HMB to independently affect testosterone.[17][18][19][20]_

** This study used creatine malate instead of creatine monohydrate.

*** This study reported an age range but not an average age. 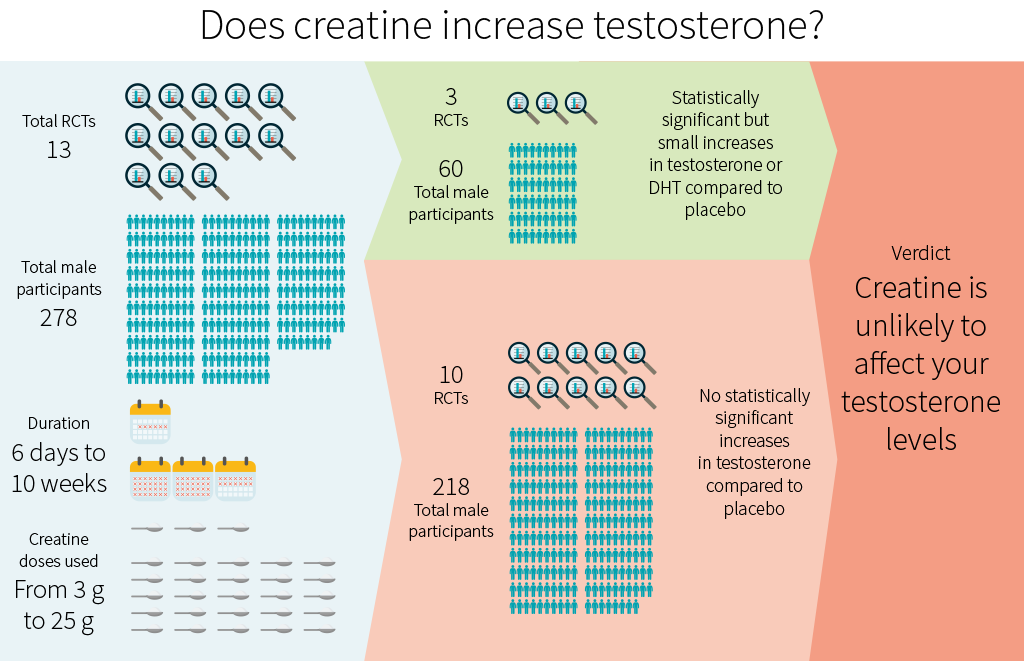 Creatine supplementation enhances exercise performance, but most studies show that it has no effect on testosterone levels. If you are concerned about your testosterone, make sure you get enough sleep, exercise, calories, vitamin D, magnesium, and zinc. Suboptimal amounts of any of these can decrease testosterone production.