Bladderwrack is most often used for

Bladderwrack is a species of seaweed known as Fucus vesiculosus that serves as a foodstuff and a source of Fucoxanthin, it is though to increase the metabolism via the thyroid but that is due to fixing iodine deficiencies historically.

Independent of the Thyroid

Bladderwrack (Fucus vseiculosus) is a brown edible seaweed commonly used as a herbal anti-obesity and health supplement and in treating goitre. It is reported to be the first source of iodine discovered and thus renowned for treatment of thyroid disorders.[1]

Its brown coloration comes from the pigment fucoxanthin, although it is in too low of levels to exert effects commonly associated with fucoxanthine supplementation.[2] A similar compound, fucoidan, is found in bladderwrack.[3] It has a chemical structure similar to heparin, an injectible anti-coagulant. Bladderwrack also has a fucophlorethol content (and a compound known as fucotriphlorethol A).[4]

Phlorotannins are a class of molecules that are based on the backbone of phloroglucinol (1,3,5-trihydroxybenzene) and, currently, are only known to be in the brown seaweed class of plants (Phaeophyceae).[9] Their structures are building block in nature (similar to lignans and terpenes) and thought to be created in this class of seaweed by a polyketide pathway,[10] phlorotannins can be subdivided based on the bonds they possess, such as aryl-aryl bonds (fucols) and arylether bonds (phlorethols).[9][10] Some examples of Phlorotannin structures are depicted below: 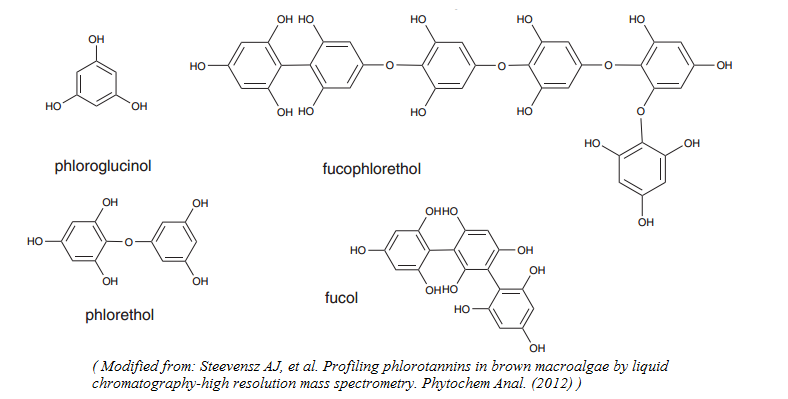 Relative to the other seaweed species of Pelvetia canaliculata, Fucus spiralis, Ascophyllum nodosum and Saccharina longicruris it appears Bladderwrack has a significnantly higher content of low-weight phlorotannin structures (either phloroglucinol in isolation, or smaller structure sizes).[9]

Phlorotannins are a unique class of molecules limited to brown seaweed (the plant class of Phaeophyceae, not limited to Bladderwrack), but are currently not too well studied

Fucoidans are a blanket statement to address some of the carbohydrates of seaweed. Fucoidans are polysaccharides with the main backbone consisting of either 1-3 linked fucopyranosyl residues or an alteranting 1-3 and 1-4 chain of the same residues.[6] Short fucoside or sulfate substitutions can exist at C-2 or C-4, and some other minor substitutions (acetate, xylose, mannose, glucuronic acid, galactose, or glucose) may be present,[11][12][13] and the sulfur content of Bladderwrack fucoidans has been calculated to be 38.4%.[14] Fucoidans tend to be implicated in aspects of immunology and cancer as it pertains to brown seaweed, and those in brown seaweed may also be implicated in maintenance of blood health (in regards to clotting).

Fucoidans are bioactive carbohydrate compounds, classified as dietary fiber due to an apparent lack of absorption, which are involved with immunology in similar manners as Beta-glucans, Ganoderma Lucidum polysaccharides, and Panax Ginseng polysaccharides

Limited pharmacological data exists on bladderwrack constituents; fucoxanthine can be reviewed through its respective Examine page.

Initially thought to be physiologically irrelevant due to their high molecular weight (and lack of subsequent intestinal uptake), fucoidans appear to be digested.[15] Fucoidans seem to be present in the blood 6-9 hours after human ingestion[16]; their presence in the blood is of similar molecular weight to pure fucoidin used in in vitro studies and suggests that extrapolation to human is possible.

Differences in blood levels were noted between groups by factors of 100-1000 fold.[16] The lower concentration was seen with a 1g dose taken once a day and measured for one day[16], whereas the higher blood concentration was seen with multiple doses and measured over 12 days.[15] There appears to, at this stage in time, be a high inter-individual variation in the rate of uptake in the gut and debate on bioavailability.

Urinary excretion of fucoidans are of lower molecular weight than serum, suggesting degradation of the fucoidan molecule in the excretion system.[16]

Bladderwrack is most commonly known for its pro-thyroid effects, which may be confounded by it being the first discovery of iodine (of which a deficiency causes goitre).[1]

Independent of the Thyroid

The fucoxanthin component of bladderwrack theoretically contributes to thermogenesis, but the overall dose found in this species is negligible (as Undaria Pinnatifida is the species of seaweed with the highest fucoxanthine content and bladderwrack is Fucus vesiculosus).

Fucoidans can inhibit adipogenesis[17] and adipocyte differentiation[18] via MAPK signalling. At cellular (in vitro) concentrations of 200ug/mL, it can induce lipolysis and simultaneously reduce adipocyte glucose uptake.[19]

In a preliminary human trial (n=3), bladderwrack consumption was shown to regulate and increase the length of the menstrual cycle in pre-menopausal women with abnormal cycle histories.[20] This study also noted a decrease in serum 17b-estradiol levels. This reduction of estrogen levels may be secondary to fucophorethols, which possess anti-aromatase activity.[4]

It is theorized that brown seaweed consumption may be a factor in the longer menstrual cycles and lower estrogen levels seen in Asian women relative to North American women[21][22] which was initially attributed to Soy.[23][24]

Fucoidins, a class of compounds in bladderwrack with an L-fucose structure and sulfate ester groups[25] that share the same biological properties[26], have a 2.3 fold higher anti-coagulant potency than Heparin in vivo[3] at 0.5-1mg/kg bodyweight. Additionally (relative to heparin) fucoidin was 2.8 times as effective in preventing ADP-induced platlet aggregation, and more effective at both anti-coagulation and anti-thrombin as well as inhibiting several pro-inflammatory cytokines.[3] Although the only current in vivo study, the results have been replicated numerous times in vitro.[27][28][29][30]

Undaria Pinnatifida (Wakame) is also found to induce ACE inhibition and lower blood pressure, and may be vicarious through shared compounds in Bladderwrack.[31]

Advanced Glycemic End Products (AGEs) are metabolic by-products when proteins get glycated (bound to by a sugar). The formation occurs when the reducing sugar and the amino acids bind (reversibly), followed by passive cyclization into N-Substituted glycosylamine compounds (still reversible). Finally, Amadori rearrangements create relatively stable Amadori products (not inherently harmful).[33] Breakdown of Amadori of Schiff products results in reactive dicarbonyl groups or reactive carbonyl groups such as glyoxal, methylglyoxal, and 3-deoxyglucosone, which then bind to amino acids and proteins to form AGEs (specifically glyoxal and methylglyoxal).[34][35] AGEs tend to be correlated with many disease states such as diabetes[36] and Alzheimer's[37] and are generally increased during aging,[37] AGE reduction tends to be seen as a therapeutic intervention point.

Phlorotannins from Bladderwrack have been demonstrated to inhibit formation of AGEs secondary to anti-oxidative effects, by sequestering reactive carbonyl groups.[38] Using the most effective fraction to extract the phlorotannins from Bladderwrack (70% acetone), sequestering of methylglyoxal (reactive carbonyl groups) were seen with an EC50 value of 0.393+/-0.0127mg/mL.[38]

Bladderwrack has been implicated in reducing carbohydrate uptake from the diet, as hypothesized in the one human study on the subject matter (although a fecal analysis was not conducted).[39]

Consumption of 500mg brown seaweed (in this study, either bladderwrack or Ascophyllum nodosum) 30 minutes before consumption of 50g carbohydrate from bread products was able to reduce the insulin area-under-curve (AUC) by 12.1% and the glucose AUC by 9%, without no significant differences in glucose or insulin readings between placebo and experimental at any single time point (but cumulative significance over 120 minutes).[39] As assessed by the Cederholm index of insulin sensitivity (measure of acute insulin sensitivity[40]) bladderwrack was able to induce a transient state of insulin sensitivity after consumption of carbohydrates, which is thought to be secondary to preventing carbohydrate uptake.[39] More significant reductions in glucose AUC (18-30%) have been observed in research animals with 5mg/kg polysaccharides after intravenous administration, ruling out inhibition of intestinal absorption; this effect was more potent in alloxan-induced diabetic rabbits, a research model for type 1 diabetes.[41]

The fucoidan class of polysaccharides is known to act as enhancers of natural immunity secondary to increasing Natural Killer Cell (NK cell) activity,[42] and this appears to extend to Bladderwrack.[14] 50mg/kg bodyweight fucoidans injected daily in mice increased the amount of NK cell activity in the spleen, and the cytotoxitiy of NK cells increased by 14+/-3.8% with Bladderwrack fucoidans relative to a 5.1+/-2.1% increase in control. Poly I:C was used as an active control, and increased activity by 26+/-9%.[14]

Consumption of seaweed can also prevent uptake of fat soluble, non-metabolizable toxins (in this cited example, dioxins) and increase their excretion rates via enterohepatic recirculation.[48] These effects are seen at a physiologically relevant dose of 4g wakame.

Bladderwrack (0.1%) has been shown to, in vitro, enhance glycerol release from fat cells (adipocytes) and was synergistic in a mixture of Conjugated Linoleic Acid at 0.003%, Furcelleria lumbricalis at 0.1%, retinol at 0.5uM, and glaucine at 0.1%;[49] reaching about double the glycerol release as the mathematical sum of each molecule in isolation. Bladderwrack and the other seaweed (furcelleria lumbricalis) appeared to be the weakest relative to the other tested molecules in glycerol release, and the two (or more) molecules causative of synergism was not demonstrated.

Bladderwrack has the ability yo stimulate pro‐collagen I production (fibroblasts) by 228% (greater than retinol at 190%) as does furcelleria Lumbricalis, and were active ingredients in a highly confounded mixture of molecules that showed efficacy in reducing cellulite (all the aforementioned ingredients, plus caffeine).[49] A decrease in skin thickness was observed in this study, and it has also been noted with 1% Bladderwrack cream when tested in humans before, where improvements in skin elasticity were also observed on the cheeks of females aged 23-36 over 5 weeks.[50] These beneficial effects on skin appear to be due to the fucoidan content.[51]

One study which happened to use a mixture of ingredients (retinol at 0.5uM, Conjugated Linoleic Acid at 0.003%, glaucine at 0.1% and both furcelleria lumbricalis and Bladderwrack at 0.1% each) found significant synergism when put into adipocytes, as the release of glycerol (a measure of triglyceride hydrolysis inside the cell) from the adipocytes was approximately double the sum of each individual ingredient.[49] The authors did not narrow down which of the above molecules were synergistic.

Although the each synergistic mechanisms are not know, CLA seems to be a promising candidiate. This is based on fucoxanthin being demonstratably synergistic with Punicic Acid that has mechanisms akin to CLA. However, the degree of synergism seen here is much greater, suggesting another player is involved

The fucoxanthin and fucoidan fragments have high toxicity thresholds, and do not seem capable of inducing toxicity in physiologically relevant dosages.[52][53] It should be noted that these two studies used Undaria Pinnitafida and that various species of seaweed have different structural fucoidans.[54] Fucoidans from Undaria Pinnatifida (Wakame) show no adverse effects on clotting even at 1-2g a day, whereas fucoidans from Laminaria japonica (Kombu) show prolonged clotting time during bleeding at doses of 300mg/kg bodyweight; still a physiologically high number, but is different than the former species.[55] The species of Okinawa Mozuku (Cladosiphon okamuranus) shows prolonged time to clotting at a dose of 1,200mg/kg bodyweight.[56]