Many people get depressed during the winter months, when we produce less vitamin D. So, can supplemental vitamin D cure seasonal depression, and maybe other types of depression? No, alas — but it may help.

The ever-popular vitamin D is the “sunshine vitamin”,[1] and sunshine is implicated in mood. So it makes sense that researchers have intently explored vitamin D supplementation for depression — supplemental vitamin D is relatively inexpensive and safe, and may provide a variety of health benefits beside brightening your mood.

But depression is complex. There are many possible causes, and no magic bullet. While you may not expect vitamin D to be a magic bullet per se, you may want to understand the current state of the evidence: what do trial results show, and how exactly exactly does vitamin D impact mood-related pathways?

What does the evidence say?

Two reviews of observational studies and intervention trials reached the same conclusions: When parsing the observational data, both reviews found a correlation between depression and low levels of vitamin D (≤20 ng/mL). When parsing the trial data, both reviews found benefit from supplementation but also low methodological quality and high risk of bias.[2][3]

Those two reviews were published in 2017 and 2016, so shortly after a 2015 meta-analysis of RCTs reported finding no significant reduction in depression after vitamin D supplementation. Its authors, however, mentioned that “most of the studies focused on individuals with low levels of depression and sufficient serum vitamin D at baseline”.[4] In other words, they didn’t rule out the possibility that in people with higher levels of depression or lower levels of vitamin D, supplementation might be more effective.

This hypothesis lines up with the conclusions of a 2014 meta-analysis, which found that, if one considered only the studies whose subjects had low levels of vitamin D at baseline (≤20 ng/mL) and were then given enough vitamin D to achieve sufficiency over the course of the trial, then supplemental vitamin D was about as effective as antidepressant medication.[5] However, this meta-analysis did not account for publication bias.

A 2018 meta-analysis focused on major depression and found a moderate benefit from vitamin D. However, it stresses the low number of qualifying studies (four trials) and, like the 2017 and 2016 reviews, deplores the low methodological quality of some of the studies.[6]

Finally, let’s mention a 2016 RCT that found that vitamin D3 taken during late pregnancy could abate perinatal depression.[7] It is only one trial, of course, and it focused on a specific type of depression, but it was methodologically sound, and it used only 2,000 IU/day: a dose considered safe for long-term supplementation.

Note: It isn’t uncommon for supplement studies to test doses too high for unsupervised use, thus limiting their real-life applicability. In the United States, the Tolerable Upper Intake (UL) for vitamin D has been set at 100 mcg/day, so 4,000 IU/day. You won’t likely reach this limit through foods alone, but you can easily reach it by adding a supplement. Also, you won’t likely reach this limit through excessive sun exposure, since your body regulates its vitamin D production, yet one case of UVB-related hypervitaminosis D has been documented (though from tanning-bed use, not from sun exposure).[8]

Vitamin D insufficiency (≤20 ng/mL) has been associated with depression. If your depression is severe, you are more likely to benefit from correcting an insufficiency. If your levels of vitamin D are sufficient, however, then whether your depression is severe or not, supplementation isn’t likely to help. (Due to the poor overall methodological quality of the studies, those conclusions are at best preliminary.)

How does it work?

Vitamin D receptors can be found pretty much everywhere in the human body, so the ways in which vitamin D might affect your mood are innumerable. One of those mechanisms could be hormonal, since vitamin D helps regulate testosterone levels[9][10] and since low testosterone can impair the mood of men[11][12][13][14] and women.[15]

Even if depression is a consequence, not a cause, it doesn’t mean that low levels of vitamin D aren’t also a consequence. People who go outside less get less sunlight but also probably less exercise — and we know that exercise benefits mood,[16] both directly and by promoting better sleep.

And of course, a consequence can have more than one cause. For instance, a decrease in vitamin D production during the winter months is a possible factor in seasonal affective disorder (SAD),[17] but so is a decrease in illumination,[18] since one meta-analysis[19] and a more recent RCT[20] found that light therapy (using visible light, free of the UVB rays that allow your skin to produce vitamin D) can improve SAD symptoms, often as much as can pharmaceuticals. It should be noted, however, that a few trials with small sample sizes make for rather weak evidence, especially since the meta-analysis didn’t account for publication bias.

The findings on vitamin D are less consistent. One study found an association between depression and seasonal changes in vitamin D,[21] but another study found no effect of supplemental vitamin D on SAD.[22] And compounding the uncertainty, the researchers of both studies stressed that potential confounders were numerous.

Vitamin D insufficiency, defined as blood levels inferior or equal to 20 ng/mL, may affect as much as 50% of the population worldwide,[1][23] including 41.6% of Americans. Unsurprisingly, low levels are especially common in Americans with darker skin, notably blacks (82.1%) and Hispanics (69.2%).[24] 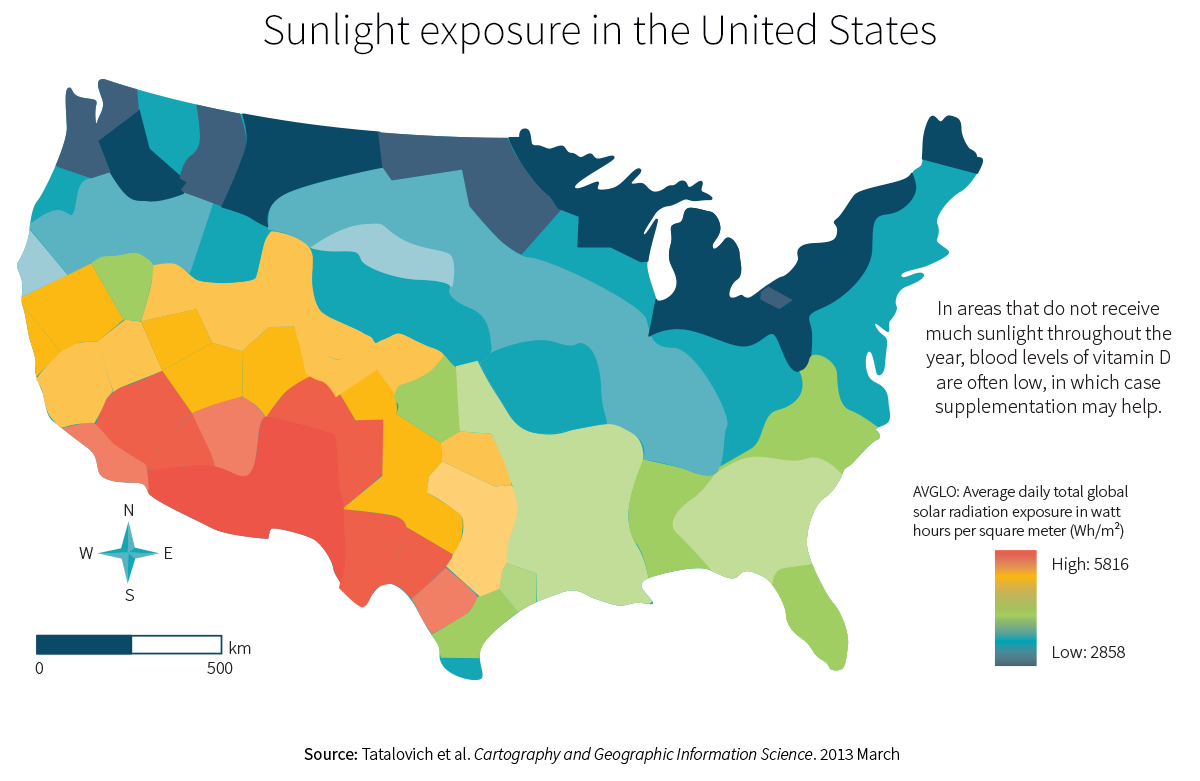 More surprisingly, it appears that even people who live in countries with sunlight year round often don’t produce enough vitamin D.[25] This is probably due, at least in part, to most people now working indoors, leaving little skin exposed when venturing outside, and sometimes also using sunscreen.

In Canada and the United States, the Recommended Daily Allowance (RDA) for vitamin D falls between 400 and 800 IU (International Units).[26] These amounts, which some researchers criticize as inadequate,[27][28] can be obtained naturally from only a few food sources, notably fatty fish (such as salmon, tuna, and sardines). However, in Canada and the United States, milk is often fortified with vitamin D.

Since few foods are rich in vitamin D, supplementation is a valid option. Should your blood test show that your vitamin D levels are low, start supplementing with 2,000 IU/day (a number that, based on the available evidence, should provide the best balance of efficacy and safety), then get tested again after a couple of months.

Note: D2 is not as bioavailable as D3, which means your body cannot use it as readily. Most D3 supplements are derived from lanolin, a waxy substance secreted by the skin glands of woolly animals. Sheep are sheared, then the lanolin coating is squeezed off the wool. Since the sheep are not killed in the process, this source of D3 will be acceptable to some vegetarians. For vegans, the only acceptable D3 supplement will be the more expensive Vitashine, a proprietary lichen extract.

Low levels of vitamin D (found in more than 40% of Americans) have been associated with depression. Among common foods, fatty fish and fortified milk are the most notable sources of vitamin D.

It is estimated that as much as half the world, including more than 40% of Americans, have low levels of vitamin D (≤20 ng/mL). People with darker skin and people who seldom go unprotected under the sun are especially at risk.

Low levels of vitamin D have been associated with depression. The decrease in vitamin D production caused by reduced sunlight during the winter months may be a factor in seasonal affective disorder (SAD).

Feeling down? Our science-based (just like this article) Mood & Depression guide breaks down which supplements work and which are a waste of your time and money.