Gout is an inflammatory condition marked by periods of pain and swelling in joints, and can feature chronic joint destruction over time. The underlying cause of gout is the formation of monosodium urate (MSU) crystals - a salt made of sodium and uric acid.

Gout is a form of arthritis in which monosodium urate crystals form in joints, causing pain, swelling, and redness in the area affected. These painful occurrences can be debilitating and tend to come on quickly, with the big toe being the most commonly affected. 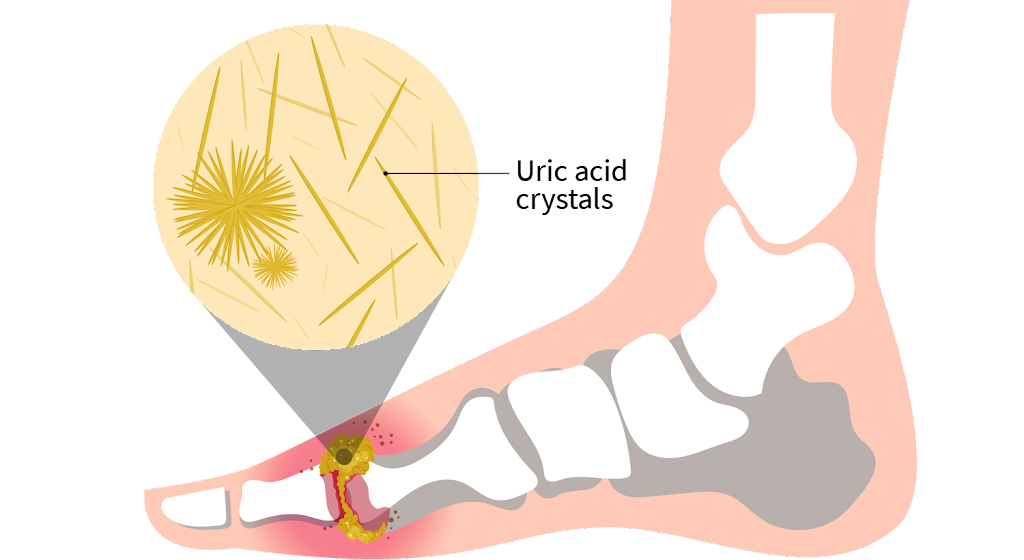 How is gout diagnosed?

Gout displays a few common features which can help differentiate it from other causes of joint pain. In the case of gout, the pain tends to peak within 24 hours of onset and is limited to one joint at a time (usually the big toe), with the joint becoming swollen and red. Blood levels of uric acid levels will also frequently be elevated.

If gout is suspected, the primary diagnostic method is a joint fluid test, in which a sample of fluid from the affected joint and examined it for the presence of MSU crystals.

Gout is the result of MSU crystals forming in joints. The primary cause of uric acid crystal formation is high levels of uric acid in the blood, either from a reduced ability to excrete uric acid or an increased production of uric acid. A variety of factors have been linked to a higher risk of gout, including high alcohol consumption, obesity, various dietary factors, certain medications, and kidney disease. Genetics can also contribute to higher uric acid levels and an increased risk of gout.

What is the connection between diet and gout?

Two dietary factors that may increase uric acid levels are purines and fructose. Purines are found in highest amounts in shellfish and organ meats, with high amounts also found in muscle meat and legumes. Fructose, meanwhile, is found in most forms of sugar (e.g., sucrose and high fructose corn syrup). In general, limiting purines and fructose may lead to a reduction in uric acid, but this has not yet been shown to benefit people with active gout.

Some evidence suggests dairy products and salt (compared with low salt intake) may lower uric acid, but neither of these have been shown to be beneficial in the context of gout.

Finally, weight loss can lower uric acid levels and at least one single-arm trial found that a diet resulting in weight loss reduced the rate of gout attacks, but because this study lacked a control group its hard to say for sure that the diet was beneficial.

Have any supplements been studied for gout?

A few supplements have also been tested for their effect on uric acid levels. Vitamin C, perhaps the most frequently studied, has been shown to lower uric acid, but much of the research was looking at uric acid in response to exercise among people who weren't at risk of gout. Only one clinical trial gave vitamin C to people with gout and it found vitamin C was inferior to a common uric acid-lowering medication (allopurinol) in its effect on uric acid.