Irritable bowel syndrome (IBS) is a common type of digestive disorder, with symptoms such as bloating, stomach cramps, constipation, and diarrhea.

Irritable bowel syndrome (IBS) is a functional gastrointestinal disorder that affects approximately 11% of the global population[1]. It is associated with abdominal pain, bloating, excessive flatulence, and altered bowel habits, severely lowering a person’s quality of life. Functional gastrointestinal disorders like IBS are not caused by structural abnormalities such as ulcers or tumors. Rather, they occur as a result of an abnormally functioning GI tract. This makes it difficult to accurately diagnose a person because no biomarker can indicate whether or not someone is suffering from IBS. Thus, clinicians have to rely on the reports of patients and on a set of criteria that have evolved over time for diagnosis.

Although the cause of IBS is still not well understood, researchers have put forth several hypotheses. Some of these theories include infections of the GI tract[2], psychological stress[3], abnormalities in gut motility[4], and gut-brain axis problems.[5] Unfortunately, no cures currently exist for IBS. It is usually managed through a combination of lifestyle changes (e.g., avoiding triggering foods, staying well hydrated), with prescription drugs being used if warranted.

IBS can be characterized according to its predominant symptoms: diarrhea (IBS-D), constipation (IBS-C), both (IBS-M, where the ‘M’ stands for ‘mixed’), or undetermined (IBS-U) as shown in Figure 1. 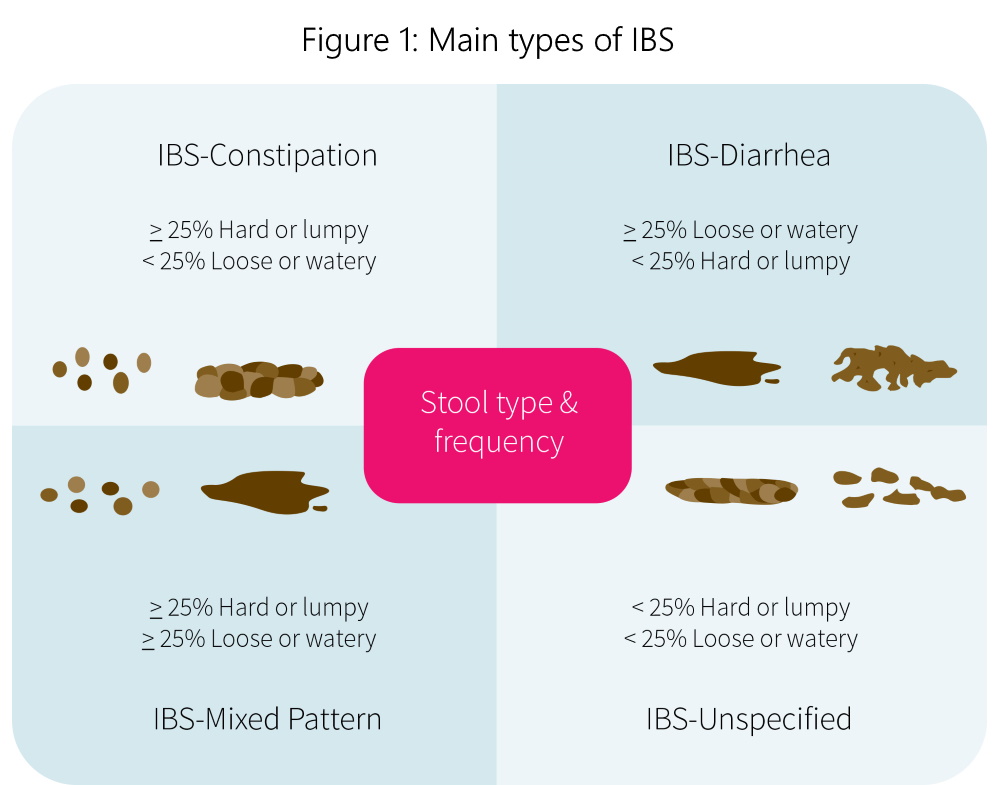